Three years ago, Erica met a young man at a fundraiser that made an impression.  Mason was a fourteen year old boy who was waiting for a mentor through the Big Brother Big Sister program.  He was tall, skinny, and loved basketball.  Does that sound like anyone you know?  Well, except for skinny.  I am definitely not that anymore.  I remember her coming home and telling me about his story.  He had been on the waiting list for a Big Brother for over 6 years.  She was moved by the story and believed that I was a perfect match.  Unfortunately, I was already matched with a Little Brother in the community program and I didn’t feel comfortable committing time to a second.  I dismissed the notion and moved on.  Six months later we attended the Big Brother Big Sister gourmet dinner.  As I was reading through the program I stumbled upon a child’s profile that sounded familiar.  It was Mason and he was still waiting for that role model.  Again, I didn’t feel like it was the right time.  It was gut-wrenching to read that profile and know that I still could not help him.  I knew, however, that the organization would find someone who would be willing to step into his life and give him the friend for whom he was waiting.  Instead, he waited….and waited.  It had been a year since I first heard his story and Mason was still without a Big Brother.  He had now waited over seven years.  I had the opportunity to meet him during an event in which he had spoken about his time on the waiting list.  His words were moving.  He talked about the wait, the questions he asked, and that his time was almost up.  You see, Mason was fifteen and he was running out of time for a Big Brother.  Once he turned eighteen, he would be too old for the program.  In his words “the game would be over”.  That night, at the event, I introduced myself to him and told him I wanted to be his Big Brother.

We spent time this week doing our “normal”.  We started the evening shooting baskets and completing our 3-point challenge.  Every week we shoot 100 3-pointers to see who can hit the most.  He improves each and every week, but he still cannot out shoot the master.   Someday, Mason, someday.  We played video games for a while to cool down before going back out for more hoops.  After beating him in H-O-R-S-E  a few times, I decided to get my phone out and film him playing.   We called it The Mason Project.  Enjoy!

Mason and I have been matched for almost two years now.  He has grown and matured a lot over that time and I am very proud of the man he is becoming.  He has gone from a freshman with failing grades to an honor roll senior thinking about college.  He is responsible for his own development.  I have only been there to be a friend, a coach, and an ear when needed.  He is a great kid who is reaching his potential.  I am witnessing the Big Brother Big Sister mission firsthand and enjoying every minute.  I have said many times in the past that I am better man today because of my role as Big Brother.  Mason has taught me just as much as I have taught him.  I am sure that he does not know it, but it is true.  I am very lucky to get to spend time with such an awesome young man every week. 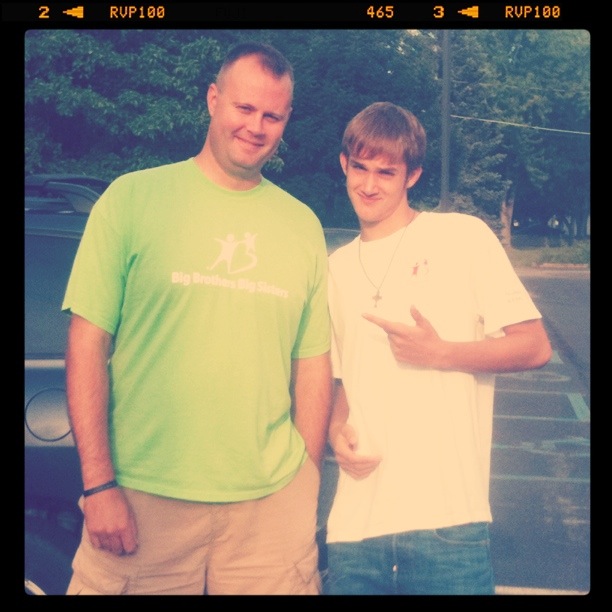 Big Brothers Big Sisters positively impacts the lives of children, and adults, in our community.  They need your help.  There are more than 500 children currently on the waiting list for a role model in Northeast Indiana.  Over 75% of those children are boys.  Boys like Mason who just need or want someone to spend time with them.  Boys who can, and will, reach their potential if someone helps to show them the way.  You can be that someone.  You are not busy.  I know that you can find 2-4 hours a month to invest in the life of a child.  When you invest in a child, you are investing in yourself and your community.  Be a Big Brother!  Be a friend!  I encourage you to visit www.bbbsnei.org to learn more, sign up, and start something BIG!