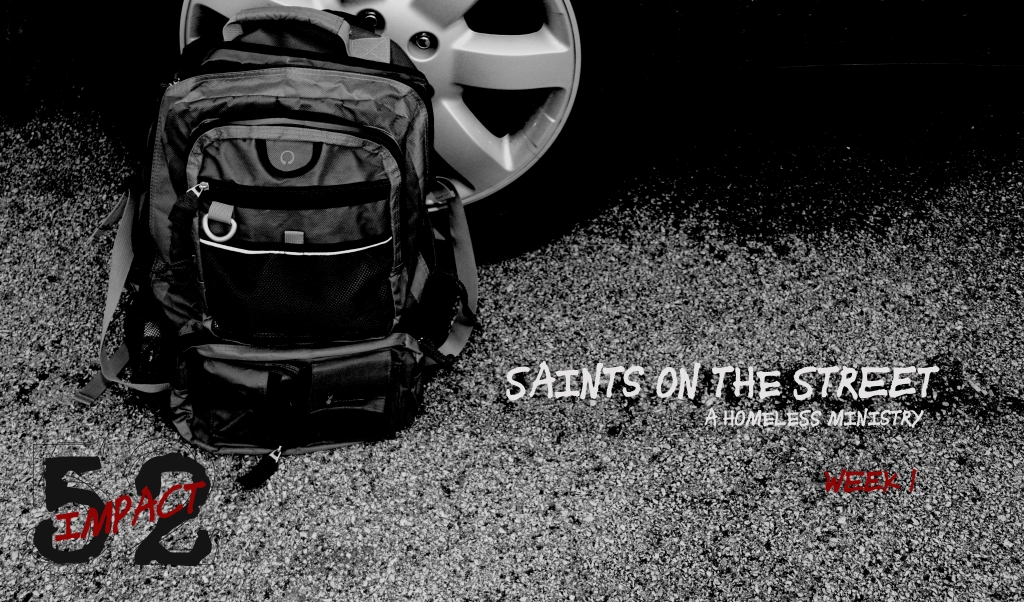 As we drove downtown, I was overcome with many emotions.  I was extremely excited to spend time making a difference, but I was also consumed with a feeling of nervousness and anxiety.  I wasn’t sure what to expect.  We were on our way to spend time walking the streets of Fort Wayne at night in an effort to help the homeless.  I was very much looking forward to the experience, but the unknown can always give you butterflies.

Upon arriving downtown, we met Jim Bell, the man behind Saints on the Streets.  SOS is a homeless ministry in Fort Wayne that serves the homeless men and women on the streets.  They fill backpacks with essential supplies and walk the streets to support their homeless friends.  As we filled our backpacks with supplies, Jim shared stories about the people we would meet on our walk.   Jim’s passion for this mission was inspiring.  His connection and commitment to the cause was contagious and any feelings of anxiety I was feeling instantly went away.

We spent two and half hours on the streets of downtown Fort Wayne.  Along the way, we met many new friends who were without a home, without money, and without food.  We stopped at different locations around town and shared the contents of our bags.  We handed out bottles  of water, snacks, canned tuna, blankets, and razor blades, just to name a few.  The individuals we encountered we so gracious and appreciative of the items we supplied.  Jim also had a pocket full of McDonalds and Arby’s gift cards that he handed each individual.  These cards really brought out the smiles in the faces of our friends.  I can remember the smile on Bernard’s face when he said, “Oh yeah, McDonald’s french fries.  There is nothing better.”  We handed out a lot of items, but there was one item we were without for which most asked.  Socks.  There were multiple requests for socks, a cherished item by those on the street.  An item, quite frankly, that I take for granted.  To those on the streets, clean, dry socks are an important item.

We met many people during our walk.  Dan was a homeless man who wanted to make sure that others on the street had snacks before he took any.  He was also a man who was looking for some small jobs to work to earn some money.  He didn’t want money for food or shelter.  He was hoping to earn some money so that he could send his mother a gift.  A selfless act, even on the street.  Rick was a recovering drug addict who made the choice to live on the streets instead of living with his father, a drug addict.  A man forced to make a tough decision.  To him, it was the right decision.  Lastly, we met Drew.  A man who has been on the streets for 17 years.  A man who chose alcohol over getting his life together.  A man whose facing jail time for public intoxication and it was evident during our conversation that this is not the first time.  His addiction to alcohol had led to the life he lives and to Drew, it is a life he is okay with.

Our experience on the streets with the homeless of Fort Wayne was unbelievable.  We saw first hand the “homes” created under a bridge and beds nestled into the rocks along the river.  We also spoke with  a group who had all of their belongings (tarps, sleeping bags, food, water) stolen recently.  This was the third time it has happened over the last few months.  Why would someone steal from those who have so little.  We learned that those on the streets look out for each other and they are frustrated with those who stand on the corner looking for handouts when they have places to go to.  Lastly, we were reminded that those on the streets without a home are people.  Regardless the reasons why they are there or the bad habits they posess, no human being deserves to live his or her life as a stray animal.

We sincerely thank Saints of the Streets for allowing us to participate in the walk.  Please check out their blog at sosfortwayne.com.  I would strongly encourage others to spend a night on the streets.  You will walk away a better person.  We are looking forward to the next time we can spend time with our friends on the streets.

1 thought on “A Night on the Streets”